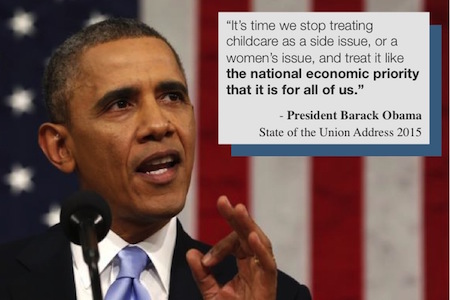 Last week, President Obama released his budget proposal for FY 2017, which includes nearly $19.5 billion for early childhood programs. With this final budget request, President Obama has reaffirmed his commitment to expanding high quality early education for all young children. The proposed budget calls for additional investments in birth to five programs across the Department of Health and Human Services and the Department of Education, including child care, home visiting, Head Start and Early Head Start, and pre-kindergarten.

“President Obama has proven time and again that America’s young children are among his top priorities,” said First Five Years Fund Executive Director Kris Perry.  “This year’s budget proposal reflects what experts have been saying for years – that early childhood education encompasses a continuum of programs and services from birth to age 5. We’re incredibly grateful to President Obama and this administration… for their continued and crucial support for our nation’s youngest learners through programs that will truly make a difference in the lives of countless children and their families.”

The president’s budget includes significant funding to expand many of these programs, including:

The President’s proposal is the first step in the budget and appropriations process, and it is our hope that Congress will follow suit in supporting our young children. We know that when we invest in early childhood, we create the best possible outcomes in education, health and economic prosperity. Supporting healthy learning and development for young children and families is not a partisan issue, and it is exciting to see early education named as a national priority for investment!