Lawmakers had a well-intentioned goal when they shifted eligibility standards for child care subsidies. Given the extensive waiting list for the subsidy, they reduced the family income eligibility for children between 6 and 12 years old so that more children under 6 would receive the aid. The idea was that younger children benefit more from child care than older ones.

But with the arrival of the new year, that change is meeting reality, and it’s having unfortunate and unanticipated consequences: many relatives who take in grandchildren or nieces and nephews will earn too much to qualify for a subsidy for after-school care. Those who can’t afford the full cost face the prospect of having the child or children put into foster care.

Stephanie Wells of Wendell has cared for her 6-year-old niece Jazilyn (pictured) since the girl was 18 months old. But now Wells, a state employee, may not be able to afford Jazilyn’s full cost of after-school care, and she’s wrestling with the prospect of having to turn her over to the foster care system. 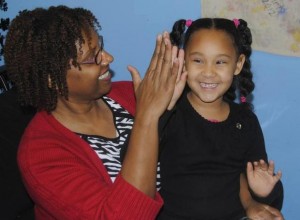 It’s counter-productive. Taxpayers will pay more to have the child in foster care, and her prospects for faring well afterward are diminished. North Carolina, unlike some other states, does not provide kinship support for children staying with relatives. Loss of the after-school subsidy will only increase the burden of trying to keep a relative out of foster care. The law also changed the measurement of family income to include not only the parent or parents but also the caretaker relative. When, for instance, a working grandmother’s income is included, the subsidy is lost.

Finally, the new law requires that families pay the full co-pay – 10 percent of family income – rather than a pro-rated share even if the child is going only to after-school care a few days or hours a week. That makes it too expensive for some families that used the service only during certain work shifts or family situations.

In the upcoming session, the changes should be brought up for review and testimony taken from caregivers and social workers. The changes can then be reversed or modified. If lawmakers want more children from low-income families to have the benefit of child care, they should look for a way to fund that expansion with federal and state funds.

Click here to read the full article in the News & Observer.

Click here to sign up for the Partnership’s advocacy alerts throughout the legislative session beginning Jan. 14th