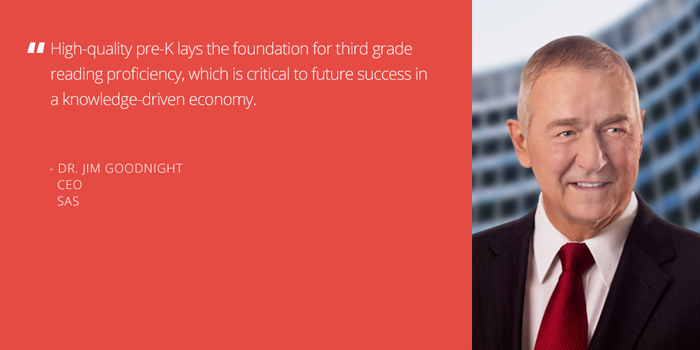 The leaders of some of North Carolina’s most prominent businesses are convinced that increasing third-grade literacy nationwide, particularly in North Carolina, is pivotal in reversing the “skills gap” and developing a workforce geared for a global economy. As a major first step, the group is spearheading the national release of Why Reading Matters and What To Do About It, a report from the Business Roundtable (BRT).

“Early literacy is the foundation for building the highly skilled workforce required for our knowledge-based economy,” said SAS CEO Jim Goodnight, who led BRT’s CEO task force that developed the report. “Current low reading proficiency among young students is deeply troubling; we must take steps now to address the problem.”

According to the BRT report, the “skills gap” is only expanding:

How do you fill these jobs when our country’s future workforce cannot read proficiently? As the report outlines:

The full report, along with the complete set of pragmatic solutions proposed by America’s CEOs, are available here.

Goodnight and his fellow NC business leaders see the BRT report, and its recommendations, as particularly salient for their state. North Carolina’s “Read to Achieve” legislative initiative aims at the same target of reading proficiency by the end of third grade. Toward that goal, BRT’s North Carolina CEOs are pressing for three policies:

Later today, these CEOs will present their policy recommendations to North Carolina Governor Roy Cooper, Senate President Pro Tempore Phil Berger, Speaker of the House Tim Moore and other members of the General Assembly. “We will make every effort to convince North Carolina’s political leaders to embrace the BRT’s recommendations and use them to benefit our children and our economy,” Goodnight concluded.

It is so exciting to see support for early childhood education from successful businesses around the state, and especially here in the Triangle! For a list of other CEO’s involved in the task force and for more information, please click here.