The White House announced this week that President Obama will host a Summit on Early Education on Wednesday, December 10. The Summit will bring together a diverse group of stakeholders, including philanthropic, business, education, advocacy and elected leaders who are committed to expanding access to high quality early education. 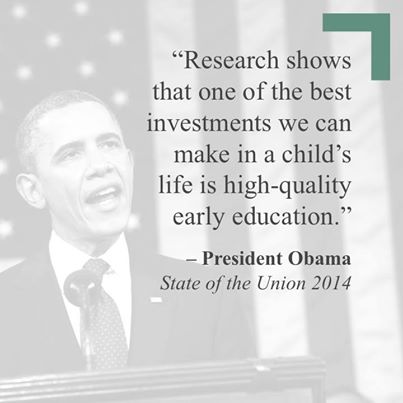 In the 2014 State of the Union address, President Obama maintained his support for expanding early childhood care, stating his hope that every child in America will have high-quality early learning experiences. As part of that effort, a series of new federal, state and private sector investments have been proposed to establish and expand evidence-based programs for children birth to five and their families.

Over the last several months, Senior Administration Officials have traveled across the country to hear from local communities about how to best advance the President’s agenda to expand access to high-quality early education. The Summit on Early Education is an important next step to continue this conversation of how to better serve children and prepare them for success in school and in life.

During the Summit, President Obama will also announce the states and communities that will receive Preschool Development Grants and Early Head Start Child Care Partnership awards to enhance and expand preschool programs and to improve access to high-quality infant and toddler care for low income families.

U.S. Education Secretary Arne Duncan recently declared that the time to debate the value of early education is over, saying that the economic case for expanding preschool is “settled.” We know that there is broad bipartisan support, particularly here in North Carolina, for expanding early education, and we are thrilled to see these issues at the forefront of a national discussion.